THE 2022 RACE WAS POSTPONED on JULY 23 DUE TO UNSAFE RIVER CONDITIONS.

MESSAGE ABOUT THE REASON FOR POSTPONEMENT AND PLAN TO RESCHEDULE:

Healthy Futures is in the process of rescheduling the Crow Pass Crossing after last Saturday’s postponement. We still need to obtain permissions and expect to announce the new date in the next day or two.

All those who remained on the roster as of July 23 will be emailed a survey indicating how they would like to proceed. The options will include: 1) remaining on the roster; 2) deferring to 2023 at no charge; 3) getting a full refund; or 4) withdrawing your spot and donating your entry fee to the Healthy Futures program.

Those who dropped from the roster before July 23 will have an option to rejoin at no charge. There also will be an opportunity for previously unregistered runners to sign up.

Most racers were surprised to learn Saturday morning that it was postponed, especially since we sent an email late Friday night saying the race was still on. In the intervening time, we learned of the high river level. Hoping the situation would improve, we then waited as long as possible and postponed the event at 7:14 a.m. We were concerned that many of you would have been stranded at the Girdwood Trailhead had we waited any longer.

Some of you are aware that the river crossing eventually dropped to a safe level and racers who chose to run through on Saturday did so without incident.

At midnight Friday, the water level at the ford route between the two white crossing poles was waist deep on a 6-foot tall person; by 7 a.m., it had not yet dropped appreciably.
Predicting changes in water levels is no easy task; given the backdrop of record-breaking rainfall and high river warnings earlier in the week, we stand by the decision, made solely with racers’ safety in mind, to postpone.

Thank you for your understanding and flexibility and expect an announcement on the reschedule date very soon.

After a canceled race in 2020 and a pandemic mitigated event in 2021, the 2022 race will return to largely “normal” operations.
See the “Race Info” page for all the details!

Congrats to 2021 Crow Pass Crossing champions Christy Marvin and Scott Patterson (the new record-holder!), along with all the participants,  sponsors, volunteers, permitting agencies and organizers. 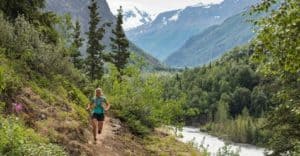 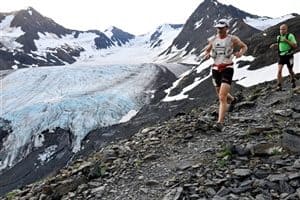 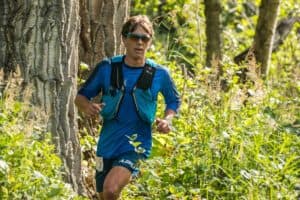 In 1984, the Crow Pass Crossing began as a “28”-mile adventure from above Girdwood to the Eagle River Nature Center.

Since then, the event has “shrunk” to its accurate length of about 22.5 miles. It has also grown in stature as an iconic Alaskan footrace replete with stunning mountain and glacier views (if you dare look up from the highly technical trail), sloping snowfields, chest-high brush, a crossing of the frigid and fast-moving Eagle River, wildlife including bears, bees and moose, and countless rocks and roots that make staying upright a constant challenge. And there are no course markers or aid stations.

Hikers typically require two or more days to traverse the trail. The fastest Crow Pass racers now take less than three hours, though anyone finishing in under six hours gains immense satisfaction and respect as a Crow Pass Crossing finisher.

Thanks also to logo designer Amber McDonough, website designer Jay Mullen, our timers at Lazy Mountain Foothills Running Club, and all the other volunteers that make this event possible.